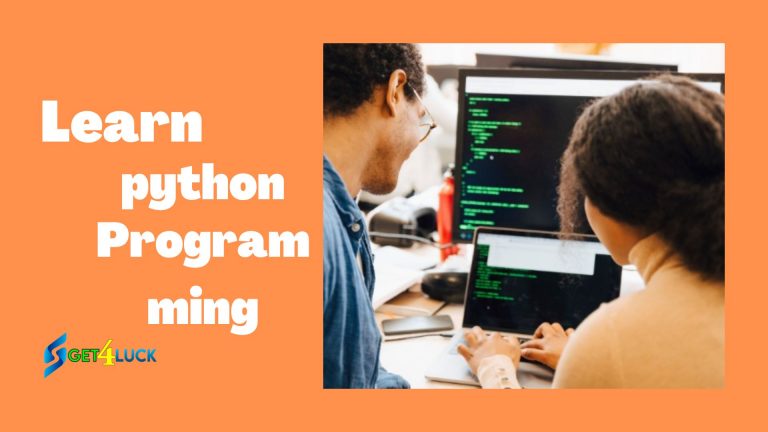 Learn python programming: Technology has become so vast these days that it is difficult to spend a single day without the comforts provided by technology. The most important facility of technology is a computer.

What is a computer? Concept of programming

The set of instructions given to the computer to solve a problem is called program or software. So, we can say that the command following of the computer depends on the program. A programmer programs a machine or writes different programs for the computer.

What is a programming language?

Python is a high level programming language used to write many different programs for the computer. In Addition, it is an advanced form of C/C++. It has many benefits such as:

The above code will print the desired number.

The above line of code will display the written line on the screen.

You can use Visual Studio Code for python programming. You can also learn python online by using the courses available on youtube.

A step-by-step procedure to solve a problem is called algorithm. Algorithms are easy to understand. They are short and written in simple English. An example of algorithm for making a cup of coffee:

The sequence of steps that explains an algorithm more efficiently is called pseudocode. An example of pseudocode for the cup of coffee is:

Now we will write an algorithm for writing two numbers. These can be:

Now we need to learn the basic syntax of Python. It includes the initialization of a variable. A variable is a memory space to store a value. The syntax for initializing and storing a value in a variable is very easy in python. A single line can perform this task. In Addition, we don’t need to type multiple lines of code in order to initialise and assign a value to the variable.

An example of the code in python is

Now we will gonna write a python program to add two numbers.  It is very simple. All we need to do is to initialize two integers and add them. Watch this code below:

The above code will add these two numbers and will display their sum on the user interface screen. In Addition, you can also execute this code by taking input from the user. All you have to do is to use the input function. See this example:

The above code will take values from the user and will print the sum of the given values.

Finding the area of a circle is very simple in python. This is the structure of the code that you will gonna write in order to find the area of the circle.

print (“The area of the circle is”, Area)

In Addition, the above code can also be written in the following method:

Yes its true, you can also display the statement of entering a number within the input function.

We all know that this modern world is a world of technology and computer science. Almost every person has his own computer system, users are finding people who can write programs for their computer that can fulfil their needs. If you have a little bit how know about programming, In Addition, professionals will definitely hire you for the purpose of creating software that can meet their needs.

This modern world of computer science and technology wants the kind of people who are technically efficient. Every person is using the facilities of technology. The demand of a programmer is extremely higher than you think. You can also acknowledge your skill online. Use online platforms such as fiver, upwork to freelance your programming skill.