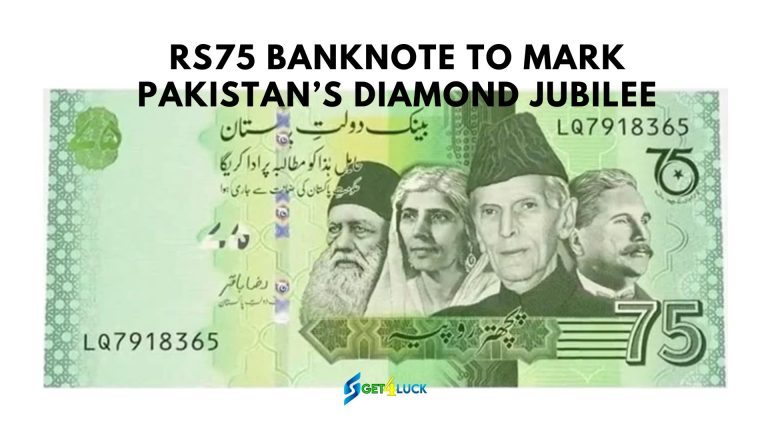 Rs75, The State Bank of Pakistan (SBP) on Sunday divulged the Rs75 memorial banknote to stamp the 75 years of Pakistan’s Independence.

Following the banner raising function and uncovering of the memorial banknote, Dr. Murtaza noticed that it is moderately uncommon that the SBP issues a dedicatory banknote; notwithstanding, the issuance of coins and postage stamps is a standard and repeating element to check long stretches of public significance.

“Finance Department of the SBP twisted around in reverse for the opportune consummation of this significant task and I value their endeavors,” Dr. Syed expressed talking at the event.

The Rs75 note is the second such banknote to be given by the national bank. Prior, the SBP gave the first thus far the main dedicatory banknote in 1997 to check Pakistan’s Golden Jubilee.

“Abroad Pakistanis can now profit from the advantages of monetary making arrangements for their post-retirement life in Pakistan through RPP and partake in a selective benefits plan,” he said.

In a joint effort with RDA banks and Asset Management Companies, SBP will delicate send off the item from August 15.

Close to the furthest limit of the function, Dr. Syed likewise introduced a presentation of uncommon photos of Quaid-e-Azam as a team with the Press Information Department (PID).

Highlights of the Rs75 dedicatory banknote.

The banknote is overwhelmingly green, supplemented by shades of white and yellow. Green addresses development and improvement, which likewise gets motivation from Pakistan’s Islamic personality. White, then again, underlines its populace’s strict variety.

The Markhor and Deodar trees pictures on the back feature Pakistan’s public obligation to address environmental change and its repercussions.

Both Markhor and Deodar trees act as images of the annihilation created by these progressions and call for critical measures to battle and opposite natural debasement.